The dates for this event have already occurred, please check back again for new dates.

Join Macon Arts Alliance for an Opening Reception to celebrate a diverse group of artists who have submitted their drawing projects for a juried exhibit and sale. The show also features beautiful sculpture by the late George O. Haskell III. Light refreshments will be served. The event is free and open to the public. 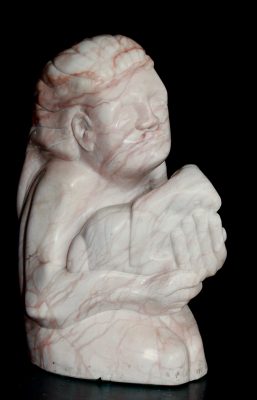 Biography of George O. Haskell III 1940-2006 George Haskell’s roots in Macon, GA are entwined with its history, but as he grew up, he lived somewhat in conflict with his “Southern-ness”. He even had a southern accent, which prompted some people to ask him: “…and where are you from?”   After finishing Lanier High School in Macon, George obtained a degree in Philosophy from Emory University, followed by German language courses at the Goethe Institute in Bavaria, as well as a semester in the Philosophy Department of Heidelberg University, and finally a law degree from the University of Virginia.   At 25, George was awarded a Fellowship to work for a year with government of Basutoland, a small mountainous kingdom in South Africa, now known as Lesotho. Upon his return, a relative, the former ambassador North Winship, encouraged him to pursue a career in the Foreign Service. After George fulfilled the necessary requirements, he was assigned to the U.S. Consulate in Munich, Germany, followed by a posting in Bremen, where he met his wife Katrin.   Toward the end of tour of duty in Germany, George’s father wanted his son to take a leave of absence, return home and familiarize himself with the growing family business, a successful chemical company. While George obliged his father, the State Department probably did not look kindly on his hiatus. The new appointment was for war torn Vietnam, a hardship and high risk posting that meant leaving his wife and new child behind. George reluctantly resigned from the Foreign Service and from then on made his home in Macon, together with Katrin and eventually four children. George continued to work for his father and was also very involved in Republican politics. As Bibb County Chair for both the 1976 and 1980 presidential campaign, George personally received Ronald Reagan both times the future president campaigned in Middle Georgia.   In his early forties, George was forced to make another career change, as his father had died and the business was sold. After a few refresher courses at Mercer School of Law, he opened a practice of law.   George had so many facets to his personality that it was hard to grasp the essence of him. One could say he was a “Renaissance Man” because of his intelligence, knowledge of many diverse subjects and his far-flung interests. Even in his later years he would delve into new ventures with gusto: acting at Theatre Macon, singing in the Macon Civic Chorale, hang gliding off Lookout Mountain, TN, piloting a small plane and SCULPTING. He kept a little studio near his law office where he developed his skill in the art form under the tutelage of Gary Blackburn, Professor and Chair at Mercer Fine Arts Department, who faithfully joined him every Wednesday evening in the studio. They were not only student and teacher, but two kindred spirits discussing God and the world.   Just short of his 66th birthday, George died in the crash of his single engine airplane. He left a legacy of over 50 sculptures, large and small. Five sculptures will be on exhibit and offered for sale during February at the Macon Arts Gallery.  A reception will be held on Frist Friday, February 2nd from 5-8 PM at 486 First Street in downtown Macon. The works will be on display through February 23, 2018.