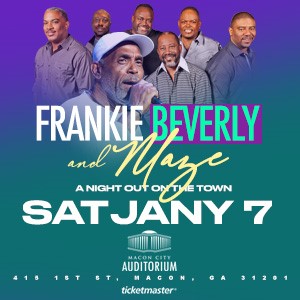 Gerod Dove Foundation kicks off The Legacy tour featuring Maze and Frankie Beverly with Regina Belle and Shirley Murdock. The tour makes a stop at the Macon City Auditorium on January 7, 2023. More than 40 years ago, Frankie Beverly moved his band, Raw Soul, from Philadelphia to San Francisco, where he renamed it Maze, at the suggestion of Marvin Gaye, 1970 and embarked on a decades-long journey of hit singles, well-received albums and tours that have earned legions of loyal fans across the nation. In 2012 Frankie Beverly and Maze were awarded the BET Cadillac Lifetime Achievement Award.