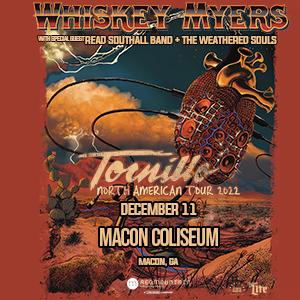 Whiskey Myers kept the sound of the South alive in the 2010s, turbo-charging the sounds of Lynyrd Skynyrd and Hank Williams, Jr. that earned them a strong cult following within the margins of Texas' Red Dirt country scene. Their music is tough and moody, full of ruminations on life in the South, with powerful rockers sitting side by side with slower, introspective tracks, and pedal steel guitar ringing out next to crunchy six-string riffs. The band laid out the template of their sound of 2011's Firewater, and they enjoyed a commercial breakthrough with 2019's Whiskey Myers. 2022's Tornillo found them expanding their sound with horns on several tracks. (AllMusic.com)